The 2nd Reading for the office of Saturday of the III Week in Ordinary Time comes from the PASTORAL CONSTITUTION ON THE CHURCH IN THE MODERN WORLD GAUDIUM ET SPES (PROMULGATED BY HIS HOLINESS, POPE PAUL VI ON DECEMBER 7, 1965). Two sections of that reading today set off some random thoughts that I want to try and articulate, because they touch some themes which are dear to me. I think these two paragraphs in particular say something about life in the world even 45+ years after their promulgation (I'm quoting them from the Vatican website; I hope nobody minds).

18. It is in the face of death that the riddle a human existence grows most acute. Not only is man tormented by pain and by the advancing deterioration of his body, but even more so by a dread of perpetual extinction. He rightly follows the intuition of his heart when he abhors and repudiates the utter ruin and total disappearance of his own person. He rebels against death because he bears in himself an eternal seed which cannot be reduced to sheer matter. All the endeavors of technology, though useful in the extreme, cannot calm his anxiety; for prolongation of biological life is unable to satisfy that desire for higher life which is inescapably lodged in his breast.
...


22. (...) The Christian man, conformed to the likeness of that Son Who is the firstborn of many brothers, received "the first-fruits of the Spirit" (Rom. 8:23) by which he becomes capable of discharging the new law of love. Through this Spirit, who is "the pledge of our inheritance" (Eph. 1:14), the whole man is renewed from within, even to the achievement of "the redemption of the body" (Rom. 8:23): "If the Spirit of him who raised Jesus from the death dwells in you, then he who raised Jesus Christ from the dead will also bring to life your mortal bodies because of his Spirit who dwells in you" (Rom. 8:11). Pressing upon the Christian to be sure, are the need and the duty to battle against evil through manifold tribulations and even to suffer death. But, linked with the paschal mystery and patterned on the dying Christ, he will hasten forward to resurrection in the strength which comes from hope.

We are taught and I think we generally believe that our eyes are the windows of our soul and not just in the sense that the clear eye and the steady glance (good eye contact) recommends a person, but also in the sense that through these windows can enter in either/both what enlightens the soul or/and what can darken it. The eye which is probably the most important component of one's visage (face as presentation of the person) is and always has been indicative of what we are about. In his Confessions, St. Augustine argues for the sinfulness even of small children pointing to the jealousy they sometimes display on their faces, through looks even before they can speak, he would say. Avarice, covetousness, lust and more ("a feast for the eyes" as they say) on the one hand and traditional asceticism and moral discipline which demanded "custody of the eyes" point to this key role played by the windows of our souls. With this and more in mind, I think you can understand why I believe that the words "Seek His Face" are thunderously profound. Images of the true face of Christ imprinted on cloth, most significantly on Veronica's veil and on the Holy Shroud of Turin, have always, always been moving and most popular and universal objects of true Christian devotion. 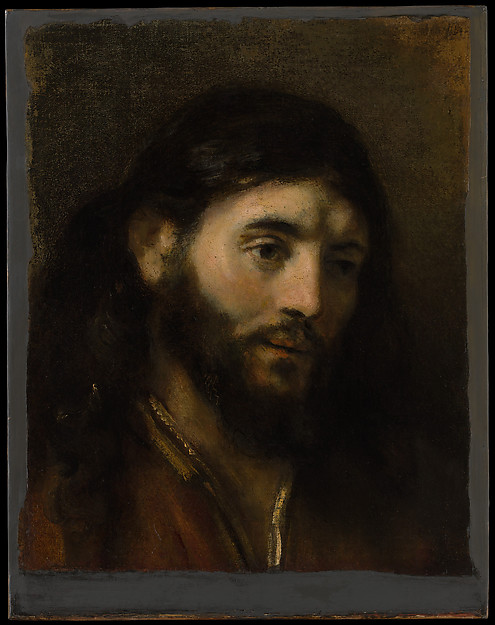 In contemplating our favorite image of Jesus, of His Face, we are sanctifying our eyes; through those windows comes light for our souls.

In the Judaeo-Christian world progeny have always been important. Apart from cultures that lean toward naming that first son Jr. after his father, there's something that will do more than comment, that will say something important and is bordering on an expression of awe when note is made that a child resembles a parent. Parents do live on in their children and find consolation in that fact. Grown children often are caught by surprise when they see a parent looking back at them in the mirror. I cannot help but think of the Old Testament Book of Tobit and the part of that happy ending when through the ministry of the Archangel Raphael a father's sight is restored and he can gaze upon the face of his son.

In my dictionary the distinction is made between Gothic (capital G), the architectural form and gothic (small g) a macabre literary form, which if I bought a new edition of the dictionary would probably include an adjectival use of small g applied to a person: he or she is rather gothic, referring to holdovers from a rather sad trend (black clothes, black dyed hair, pale skin) which seems to romance with death. The whole fixation on the eternally dead vampires, who nonetheless suck the life out of others, is a bit of the same sadness or hopelessness in the face of death. One could claim that this gothic business is just faddy and no more than superficial, but if light never enters the temple?

Part of the spirituality of St. Josemaria Escriva de Balaguer and which he recommended to everyone, especially working men and women, is to have available pictures (holy cards?) especially of Jesus and Mary that we can glance at them regularly in the course of the day. He, as we can understand, insisted upon the need to let light into ourselves, temples of the Holy Spirit.

When it comes to spiritual combat against the forces of evil both in the world and in our lives, when it comes to rallying around Christ's standard, the standard of the King (Vexilla Regis), we know we have to seek to change bad habits, to root out those actions which are death-dealing. It might be romantic to think of ourselves fighting with the Lord, as it were, back to back, but in point of fact, the victory is His and we are called to open the doors or windows of our souls to let Him in. We are called to seek His Face.

I belong to another time in the sense that wall posters were not part of my growing up. I never wanted or even thought about hanging a poster on the wall of the bedroom I shared with my two littler brothers. In that sense, parents have it harder today, because they have to discuss a child's poster choices. While much would be indifferent, a lot is apt to shroud the windows of the soul in darkness or on passing splendors, which age and illness will soon enough strip of their beauty or splendor. Ours is the choice of opting for life or death. We are invited always and everywhere to choose life.

Posted by Thomas Gullickson at 6:59 PM