The Immaculate Heart / Assumed into Heaven

We're having our first major break in the summer heat here in Kyiv with nigh unto 48 hours of rain (hardly  what you'd call intermittent either!) and much cooler temperatures. I'm enjoying it for no particular reason except that it puts me today in the mood to recollect, ever so fondly, both concerning my birthday saint, the martyr for brotherly love, St. Maximilian Kolbe, as well as concerning tonight's vigil Mass and looking forward to tomorrow's solemnity of the Assumption of the Blessed Virgin Mary.

Saint Maximilian Kolbe, Saint Louis-Marie Grignion de Montfort (31 January 1673 – 28 April 1716), and countless other great men saints are a constant and for some also unexpected challenge to the hearts and sentiments of many Christians, just because of the way and intensity with which they expressed unbounded confidence in and love for the Mother of God. Too many Christians play shy when it comes to Mary the Mother of God and we object when we are confronted by her saintly courtiers. Thinking of the Pope who gave  Saint Louis-Marie Grignion de Montfort  new popularity during our lifetime: How many Catholics, since October 1978, haven't stumbled or flinched when confronted with the explanation behind the motto of Blessed Pope John Paul II, TOTUS TUUS? These recent years and decades have been ones for many Catholics of struggling with the role of Mary, ever Virgin, in our lives. For some folk that struggle finds its focus or is precipitated in the contemplation of her Assumption, body and soul, into Heaven. Death and decay did not touch her body; she is with her Son in glory in the fullness of her holy humanity.

While some people might contend that a priest's greatest challenge is to preach well on a very theological, if you will, solemnity, like the Sunday of the Most Holy Trinity, I would say this is only apparently so because priests often miss the turmoil within the hearts of those down in the pews listening on 15 August. Sometimes we misread the puzzlement of people over a given reading, whether it be the first reading of the Vigil Mass about the Ark of the Covenant or the Reading from the day from the Book of Revelation with images of the Woman and the Dragon. I had a wonderful uncle who was baptized only at past age 60, a devoted husband who had always faithfully accompanied my aunt to Mass on Sundays and Holy Days and finally, as much out of love for her as not, took that final and definitive step and requested baptism as a Catholic Christian (as a teenager I was his sponsor!). He was a good man and a devout Catholic. Even so, I remember he'd get quite frustrated each year on the Assumption and ask why somebody couldn't just clearly say what they were talking about. I wish I had listened better to his grumbles, instead of just writing them off to incomplete catechesis. In reality, I think my now long departed uncle and many others rather found and find themselves dumbfounded by the mystery of love which the Church proclaims in the Assumption of Mary.

It is as if it were all too much, that we really don't want to see or cannot bear the mystery of God's unbounded love, shining through Christ's redemptive Sacrifice and manifested in all its implications in Mary His Mother now sharing His Throne and His Glory fully in heaven, as we only hope to be able to do on the last day. As they joyfully protest their love for Mary, people like Blessed John Paul II, Maximilian Kolbe and Louis-Marie Grignion de Montfort leave us breathless and lagging behind.

I hope this Holy Day gives you a little pause, some freedom to contemplate such love and by drawing closer to Mary enter more fully into the mystery of our eternal salvation. One of the blessings of a happy and wholesome home life would be that it gifts a child with a sense of the presence of God. Apart from home and hearth, many less fortunate Christians are nonetheless blessed by the schooling they receive at Mary's knee. Pope Paul VI spoke of his longing to linger in the school of Nazareth, in the home of Jesus, Mary and Joseph. Would that we all could!

Some of the great masterpiece paintings of all time show the mystery of the Assumption of Mary as including a contemplation of her empty tomb. Assumption artwork is often of rare beauty. 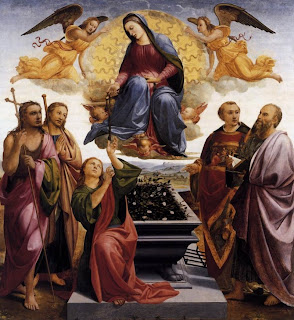 Perhaps the greater challenge is trying to fathom the implications of that which Mary did really and always absolutely, namely her attentiveness to the Word of God, as she took Him unto herself in obedience as His maid servant. Obedience has its yield. Love is to be found nowhere else. We should never leave her side, nor should we ever lag in racing to keep up with these saintly men who were forever outdoing themselves in protesting their love for her, the first and best disciple of her Son.
Posted by Thomas Gullickson at 9:55 PM