Yesterday, I was watching parts of the news briefing given by Father Lombardi and was struck by a troubled question from a journalist, a bit dumbfounded by attempts already so soon from colleagues to cast doubts on the integrity of Pope Francis (political issues from his past as Jesuit superior in Argentina). Father Lombardi fielded the question well, but I can imagine many ordinary Catholics being saddened in the face of such hostility toward our new Pope on the part of a certain element in the media. I’m sure our Holy Father would also say that such should not come as a surprise and might even quote St. Francis of Assisi talking about wherein true happiness resides. I took added comfort from this morning’s Gospel (Saturday of the 4th Week of Lent), as we stand on the eve of Passiontide and a special focus on the sufferings of Christ and His Cross. How very important is the reminder that if we would be the Master’s good servants and followers we cannot expect better treatment than He Himself received:
“Several people who had been listening to Jesus said, ‘Surely he must be the prophet’, and some said, ‘He is the Christ’, but others said, ‘Would the Christ be from Galilee? Does not scripture say that the Christ must be descended from David and come from the town of Bethlehem?’ So the people could not agree about him. Some would have liked to arrest him, but no one actually laid hands on him.
The police went back to the chief priests and Pharisees who said to them, ‘Why haven’t you brought him?’ The police replied, ‘There has never been anybody who has spoken like him.’ ‘So’ the Pharisees answered ‘you have been led astray as well? Have any of the authorities believed in him? Any of the Pharisees? This rabble knows nothing about the Law – they are damned.’ One of them, Nicodemus – the same man who had come to Jesus earlier – said to them, ‘But surely the Law does not allow us to pass judgement on a man without giving him a hearing and discovering what he is about?’ To this they answered, ‘Are you a Galilean too? Go into the matter, and see for yourself: prophets do not come out of Galilee.’” John 7:40-52

Can I dismantle or disarm the a prioris with which some secularists/ science freaks would hem in and limit our universe? How can I carry forward, and do so fully, ultimate discourse on the fullness of truth? I look to Jesus and the beauty of the Son of Man; I remain confident in Him and not in my own talents. I proclaim Christ and Him crucified, as does Francis I. 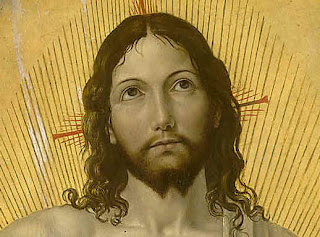 Posted by Thomas Gullickson at 12:48 PM