For the Sake of the Resurrection of the Dead 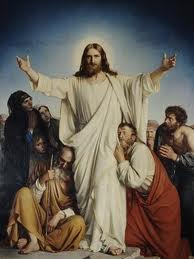 I've always been intrigued by this painting and the reactions which it records, reactions on the people's faces and by their postures, on the part of those surrounding Jesus, their reactions to Him the Risen and Glorious Christ. The two older men touching Jesus, obviously want to be close and clearly express a desire to share Christ's Glory. Most everyone else is awestruck.

The painting confirms the accurateness of St. Augustine's analysis of one of the big problems or quandaries facing us Christians; I am referring to it as addressed in his Sermon 242A,  During the Easter Season, on the Resurrection of the Body (Augustine, Saint; Daniel Doyle, O.S.A.; Edmund Hill, O.P. (2007-01-01). Essential Sermons (p. 299). New City Press. Kindle Edition.). Augustine's hearers dare not express doubts about the Lord's Resurrection from the Dead, but they certainly deny the possibility of their own resurrection. Augustine deals with their arguments and leads me to a brief reflection not on life's end and eternal promise also for them, because of Christ's Resurrection, but because of life's promise as seed at the very moment of conception, going from birth through travail to the grave and on to glory in that beautiful, terribly beautiful Christ, Who may awe me, but to Whom, oh, how I wish I could cling like the man in the painting. Here's my quote for today from that sermon:

"Of course we all know that we are mortal. So in the same way as we reflect on the womb of the earth, in which the body lies, seeded in order to rise again, let us also reflect on ourselves seeded in the wombs of our mothers, from which this complexity of limbs and organs arose. Where were these five senses of the body hiding? Where in that drop of moisture were eyes and tongue and ears and hands? Where did these various functions of different organs proceed from? Who created it all, who shaped it all? Wasn’t it God? Very well then, the God who was able to thrust you out in proper shape from the womb, himself wishes you to judge what can be done from what has been done, and to believe that he can also bring you alive from the tomb." [Essential Sermons (p. 300).]

Simply stated, I want to go beyond Augustine's focus and state that, not just maybe, life is indeed so hard to defend in today's society because the Easter Proclamation does not resonate as it should in our/their hearts (abortion, suicide, euthanasia, various forms of self mutilation). As essential as belief in a Creator God is, the picture only comes together in Christ's Victory. As fundamental as the commandment, Thou Shalt Not Kill, is, it is in the promise of the Resurrection shared that I am caught up in confusion/awe and utter respect concerning the dignity of the human person, not only created by God but saved and destined for eternal glory.

The implications of this for all aspects of social intercourse and the whole notion of peace, of course, are staggering. I'm thinking again of the book I just recommended about the Servant of God Fr. Emil Kapaun. As his Chinese captors ordered him to be carried to the house of death, a shack away from the other POW's where the dying were simply withdrawn from sight without food, water or care, Father asked forgiveness of his most despicable guards. Those who witnessed this effort on his part understood immediately its significance in terms of the priest's hope in everlasting life, in the resurrection of the dead.

As a believer, I am impelled always and everywhere not only to free others by spontaneously offering my forgiveness, but to seek their forgiveness for even my rather venial hostility or hardness of heart in their regard. Not only is no one without sin, but none can be without hope of a share in that communion which is Christ's Kingdom, everlasting and glorious. Unsolicited, or undeserved on the part of whomever, I am compelled to hasten my step to the heights of my Savior's forgiveness, His Sacrifice, His Victory, His Glory.

Posted by Thomas Gullickson at 3:10 PM