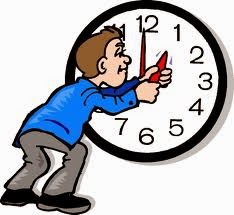 It just dawned on me this morning: among the things I truly miss about living in the tropics is the constancy of time. Near the Equator there is no "spring forward, fall back", no attempts to save daylight. Continental Europe went daylight or legal time in this morning's wee hours. It's not so much the loss or gain of an hour which troubles me, as a kind of wrenching incertitude which comes upon me for a few hours either side of this twice annual event. Although losing an hour in the spring is far worse, the gain in the fall is no real compensation. It doesn't assuage my uncertainty in the least.

Some might say that we depend too much on time pieces; some would just say I am exaggerating. For those out there, however, who feel like me, accept my expression of solidarity. I won't shout "Down with time changes!" but I will note for myself that experience tends to teach that what was proffered as an economy measure with all sorts of benefits is in point of fact a deception or simply razzmatazz.

Now I now that the people who arbitrarily imposed this fiasco are most long dead and I do not wish them Purgatory for the suffering they caused others, but it certainly gives one pause to think about the relative merit of all sorts of other changes in our world. A great uncle of mine, long passed to his eternal reward, was a man of great personal discipline who passionately loved life and celebrated all he had seen and experienced over the course of his years. He would sum it up for us children, recounting how as a child he watched early South Dakota settlers from Northern Europe drain marshland for farming with the help of teams of plow horses and whose same eyes watched the TV reports of the first moon landing. We have since learned that perhaps draining those marshes was a bigger mistake than sending a man to the moon, but in either case not much more than distractions from what is truly essential to life.

Would the world be better if our leaders made reparation for all the harm done through unnecessary change? I don't know. Bitter Lake in Miner County is still that after a hundred years; alkali got the upper hand and marsh has not returned. It must be said that making reparation for past harm, intentional or unintentional, in and of itself would be a change too; the cycle could just very well repeat itself. However, I cannot help but think that a little recovery or restoration might not be all bad and may even bring healing. Turning the clocks back is no less wrenching than pushing them forward; both stress the gears of the timepiece.

Posted by Thomas Gullickson at 10:40 AM