Rachel weeping for her children 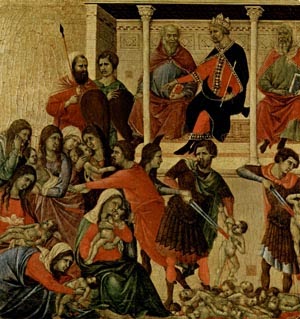 "Herod was furious when he realised that he had been outwitted by the wise men, and in Bethlehem and its surrounding district he had all the male children killed who were two years old or under, reckoning by the date he had been careful to ask the wise men. It was then that the words spoken through the prophet Jeremiah were fulfilled:
A voice was heard in Ramah,
sobbing and loudly lamenting:
it was Rachel weeping for her children,
refusing to be comforted because they were no more." (Matt. 2:16-18)

We need to redouble our efforts to end the crime of abortion, to rescue all we can from infanticide, but we also need to bring our world to tears for so many other crimes perpetrated against children. Much of this happens in the Western world today because the high and mighty have driven out the Christ Child. They cannot get their hands on Him but to banish Him from hearts, minds and public places, but with impunity they abuse and kill in His stead the infant in the womb, the newborn, the child.

We need to be crying a lot more.

Posted by Thomas Gullickson at 9:32 AM