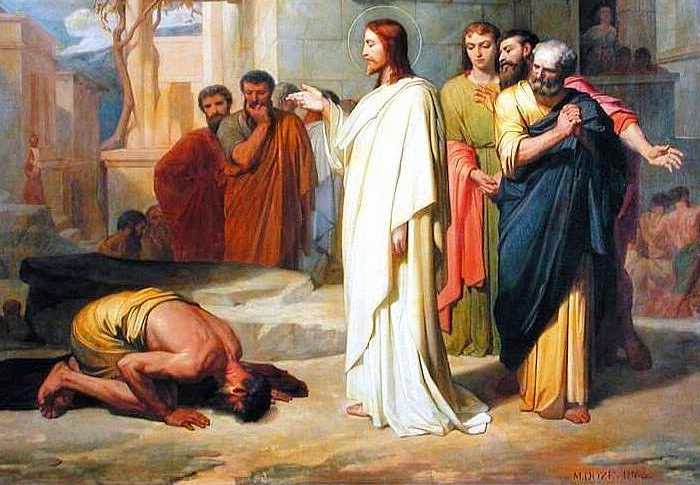 "A leper came to him begging him, and kneeling he said to him, “If you choose, you can make me clean.” Moved with pity, Jesus stretched out his hand and touched him, and said to him, “I do choose. Be made clean!”" (Mark 1:40-41)

The First reading for this Sunday, taken from the Old Testament Book of Leviticus 13:1-2,44-46, would have been cause of consternation for my dear, long dead, favorite uncle. It would probably have put him off such that he paid no more attention awaiting the priest's homiletic explanation, then, no doubt, only to be miffed that not a word was spent on this thing about leprosy and contagion:

"The Lord said to Moses and Aaron, ‘If a swelling or scab or shiny spot appears on a man’s skin, a case of leprosy of the skin is to be suspected. The man must be taken to Aaron, the priest, or to one of the priests who are his sons.  ‘The man is leprous: he is unclean. The priest must declare him unclean; he is suffering from leprosy of the head. A man infected with leprosy must wear his clothing torn and his hair disordered; he must shield his upper lip and cry, “Unclean, unclean.” As long as the disease lasts he must be unclean; and therefore he must live apart: he must live outside the camp.’"

Had he then by a Sunday afternoon visit from his favorite (back then not even thirty years of age) priest nephew, in response to his irritated insistence, I would have attempted to settle the matter by saying the Church intended with this text to document why in the social-cultural context of the day it was so daring of Jesus to even speak to a leper, let alone touch him and perform a miracle of healing. No doubt my uncle would have let me off the hook, albeit without the satisfaction he desired in terms of an explanation for a scene without corollary in his then many years of life, reflection and experience. I am not saying that if this reading had been the occasion for a specific teaching, somehow applicable to our day and time, that my uncle would have accepted it; he would have had lots more questions for me but they would have been beyond annoyance that the passage had been passed over in silence and centering on something very concrete and substantive.

In attempting to make sense of Russian aggression here in Ukraine, I read a lot of articles by Paul Goble, who reviews and comments on a broad spectrum of Eurasian issues, referring for the most part to Russian sources. I  rarely agree with the people he quotes and don't always agree with his analysis, but I do not regret the time spent on helping me form my own mind on the issues.

The other day he posted an article on attitudes toward marriage and family in the Russian Federation, entitled "Widespread Support among Russians for Non-Traditional Families Disturbs Orthodox" (here). It would seem that Russians differ little from people in the "wicked West", so eagerly condemned by President Putin and the Orthodox Church of Moscow. There, as in the West, cohabiting before marriage, bringing forth children outside of wedlock, excluding children entirely from marriage, not marrying, and much more seem to go, yes, even in the bosom of Holy Mother Russia. This is not reason to gloat or scoff, but rather to reflect on what faces us all. One could even express understanding for Metropolitan Hilarion Alfeyev's talk about a "strategic alliance" among Christians to push a moral agenda. Western romantics are kidding themselves about Orthodoxy of a Russian stamp being better than we or having the answers; no traditionally christian land or region seems to have a corner on moral decadence; we are all in trouble.

The cure` of Ars, St. John Vianney did much more for his parish and the world than spend hours and hours in the confessional. He also worked hard to root out what had been acceptable or common forms of dissolute entertainment in town. He re-channeled lots of energy for good. Maybe that accounts for his popularity today: he led out of his own powerlessness; he was unflinching in his personal asceticism and thereby led people to choose Christ over all. He was judge in Christ's stead only within the internal forum of the confessional; there he spoke the truth and lifted up the penitent in the person of Jesus Christ, who had gladly healed the leper who sought his aid. For a whole people or tribe, as valuable as a multiplication of Vianneys would be, it is not enough. Law, precept must protect the whole people from confusion and contagion. Public evil-doers must be cast out; St. Paul would say for the sake of their own salvation. They must be cast out for the sake of the whole.

That is where Leviticus of this Sunday comes in for me and that would be an essential component of anything I could say on this Sunday about the mercy of Christ toward those who present a mortal danger for the community.

At some point in the desert on their Exodus journey to the Promised Land, in those forty years of forging a People for God, the excommunication of loved ones diagnosed with leprosy was surely an innovation and must have come very hard and been met with rebellion. Imagine the Levite or priest proclaiming Dad or Mom "unclean" and driving that person from the camp! The issue was contagion and the goal was to spare the community, not so much in punishment of the afflicted person, but for the preservation of the whole people from the rigors of this dread illness.

Up until about a half century ago, people understood (without necessarily liking it) the good sense of moral quarantines as well, even of excommunication as medicinal perhaps for the evil-doer, but more importantly as defensive of the culture and protective of a nurturing environment for innocence and virtue, already sorely tried by the wickedness and snares of the devil. The battle against principalities and powers was certainly more real than it is today and common wisdom ratified attempts by authority to reduce the amount of harm and confusion public sinners could cause the community by labeling them "unclean" and casting them out. The routine link between Confession and Holy Communion with the longer fast also served to preserve non-communicants from judgmental stares.

When the new Code of Canon Law was promulgated in 1983, it was noted that causes for automatic excommunication had been drastically reduced: notably committing or materially cooperating in a procured abortion remained on the list, both because of the gravity of the crime and because of the real moral danger its scandal presented for the whole body of the Church. Within the Church today, there is what has been labelled a "mercy party" seemingly oblivious to the dangers of  unmanaged or unmanageable moral contagion in the midst of the people.

For many Catholics like the Russians in the survey, upholding certain moral standards is a matter of indifference and "experience" at the expense of virtue is regarded as somewhere between harmless and helpful. This is contrary to all we have ever been taught over the centuries; it is counter-intuitive or to quote a slogan, "Measles parties are a bad idea". They talk about the "new PC" (political correctness) on college campuses, which goes about damning anything and anyone contrary to their extended LGBT+ agenda. Perhaps those who shortened the list of grounds for excommunication in the Code were deluded; perhaps today it is time to batten down the hatches, close a few windows and save the children from the harsh winds of moral turpitude; perhaps, really, it is time to create space for the Good News of Jesus Christ. Perhaps it is time not to retreat but to fight back.

Posted by Thomas Gullickson at 11:58 AM