The Emperor's New Clothes - It Goes Both Ways 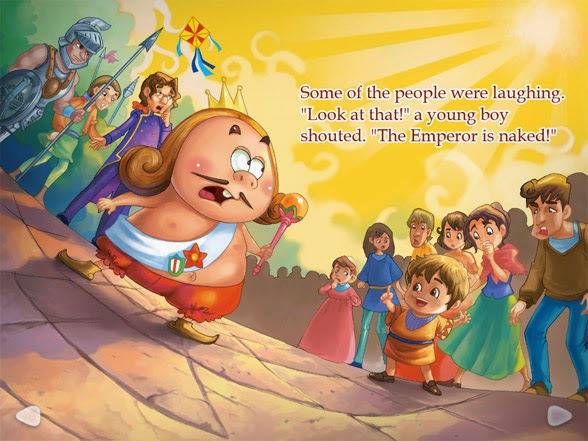 My earliest recollection of a children's story as a thought piece has to be of Hans Christian Andersen's "The Emperor's New Clothes". For a tale, it is incredibly multifaceted and gives the edge to the clear-sighted simplicity of childhood. If you have never read the tale, well, you are missing a fundamental life lesson (here). If you know the story or once you are up to speed, here's the closing few lines:

"Well, I'm supposed to be ready," the Emperor said, and turned again for one last look in the mirror. "It is a remarkable fit, isn't it?" He seemed to regard his costume with the greatest interest.
The noblemen who were to carry his train stooped low and reached for the floor as if they were picking up his mantle. Then they pretended to lift and hold it high. They didn't dare admit they had nothing to hold.
So off went the Emperor in procession under his splendid canopy. Everyone in the streets and the windows said, "Oh, how fine are the Emperor's new clothes! Don't they fit him to perfection? And see his long train!" Nobody would confess that he couldn't see anything, for that would prove him either unfit for his position, or a fool. No costume the Emperor had worn before was ever such a complete success.
"But he hasn't got anything on," a little child said.
"Did you ever hear such innocent prattle?" said its father. And one person whispered to another what the child had said, "He hasn't anything on. A child says he hasn't anything on."
"But he hasn't got anything on!" the whole town cried out at last.
The Emperor shivered, for he suspected they were right. But he thought, "This procession has got to go on." So he walked more proudly than ever, as his noblemen held high the train that wasn't there at all.

When you are small, you laugh at the silly king, so completely taken in by scoundrels and abandoned to his folly by his courtiers; that a child should know better, of course, moves our whole post-infancy crowd to righteous pride in the face of adult dissimulation. As you grow and experience something of life, attention shifts from the silly, vane king, not so much to those in criminal fashion who robbed him, but to all those around him accomplice to their crime, as well as those on the street who dared not point out the king's folly, proving themselves at least fearful if not self-interested to the point of disloyalty to their emperor so exposed to potential ridicule.

I doubt if there are many out there like Hans Christian Andersen today, who are writing things so profoundly childish and fun, yet subtle and insightful to the nth degree. The life lesson to be taught, if you will, is directed neither to the emperor nor to the smart little boy, but to this world's courtiers. Sadly, the "better-than-thou" crowd immediately find manner to point fingers at those who have managed to wiggle their way into somebody's entourage, tisk-tisking them for their self interest at the expense of the man or woman they supposedly are vowed to serve. Let's be kind and term that a first reading of the tale and express the hope for growth and maturity and a look at ourselves generally, as we go about too often giving the difficult other enough rope to hang himself.

Archbishops aren't exactly emperors, even if perhaps just as vulnerable to vanity. As a category, however, we are certainly often the target of the self-interested flattery or fawning which is akin to some people's strategy for strange dogs, out in the open, extending a hand and a gentle word in hopes of fending off a bark or a bite.

Believe it or not, the great Feast of the European Patrons, Sts. Cyril and Methodius, was what got me off on this funny track.  From the Old Slavonic Life of the Saint quoted in today's office:

"The following day, he assumed the monastic habit and took the religious name Cyril. He lived the life of a monk for fifty days.
When the time came for him to set out from this world to the peace of his heavenly homeland, he prayed to God with his hands outstretched and his eyes filled with tears: “O Lord, my God, you have created the choirs of angels and spiritual powers; you have stretched forth the heavens and established the earth, creating all that exists from nothing. You hear those who obey your will and keep your commands in holy fear. Hear my prayer and protect your faithful people, for you have established me as their unsuitable and unworthy servant.
“Keep them free from harm and the worldly cunning of those who blaspheme you. Build up your Church and gather all into unity. Make your people known for the unity and profession of their faith. Inspire the hearts of your people with your word and your teaching. You called us to preach the Gospel of your Christ and to encourage them to lives and works pleasing to you.
“I now return to you, your people, your gift to me. Direct them with your powerful right hand, and protect them under the shadow of your wings. May all praise and glorify your name, the Father, Son and Holy Spirit. Amen.”
Once he had exchanged the gift of peace with everyone, he said: “Blessed be God, who did not hand us over to our invisible enemy, but freed us from his snare and delivered us from perdition.” He then fell asleep in the Lord at the age of forty-two.
The Patriarch commanded all those in Rome, both the Greeks and Romans, to gather for his funeral. They were to chant over him together and carry candles; they were to celebrate his funeral as if he had been a pope. This they did."

Not vanity, on the part of the emperor, not self-interest, on the part of his courtiers, but genuine humility and a complete outpouring of self to the greater honor and glory of God, distinguished young Cyril and were confirmed and exalted by papal decree at his death.

Children can be devastating in their clear-sighted condemnation of vanity and for that reason alone they should be lovingly urged, yes, constrained, to hold their tongues, until years of innocence pass and they can see beyond the king's folly to his courtiers' self-interest, leaving him perhaps exposed out in the cold. Adults not at court should see the wisdom of holding their tongues and not damning the courtiers until they renounce their own self-interested ways and fawning approach toward whomever it is they may not know but certainly whose bark or bite they wish to avoid.

Sts. Cyril and Methodius found themselves caught up in the intrigues of the courts at Rome and Constantinople; they found themselves hounded by "interests" often cloaked in religion, especially from German lands. They gave incomparable gifts in terms of faith and culture to the Slavic peoples, while courting only the King of Heaven.

Posted by Thomas Gullickson at 11:55 AM