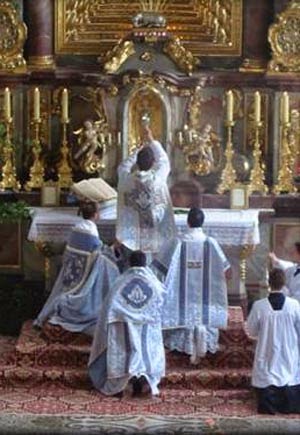 I shared this article from New Liturgical Movement on Facebook and was surprised to actually receive comments as opposed to the usual pro forma "Likes" and "Shares", which I interpret as a sign of recognition, not necessarily even guaranteeing that the person has read the post. Almost a week has gone by and from time to time I come back to the issue, which the author of the article raises and to which I received reactions, it being one or two issues really, of: a) putting some meat on the bones of mutual enrichment; b) articulating as best one can the scandal involved in the rupture or discontinuity brought upon the Roman Church's Liturgical Tradition by the Novus Ordo.

Basically, despite my profound respect, I want to differ with Peter Kwasniewski on this article. His intention is well-meant, but does not address the heart of the problem or adequately express the ultimate intent of efforts at mutual enrichment between the Ordinary and Extraordinary Forms of the one Roman Rite:

"Since the usus antiquior preserves in a specially intense way the theology and piety of many centuries of faith, a judicious emulation or adoption from it of elements of holiness and “good form” will make a real difference in the devotion of the celebrant and the ensuing fruitfulness of the Mass."

a) Mutual enrichment can't be about putting meat on the bones of either of the two forms, if it cannot do that for both; what other sense can the word mutual have? The 1962 Missal and the 3rd Edition of the Roman Missal are both equally untouchable as far as anyone other than the Supreme Legislator goes. Apart from nourishing piety, mutual enrichment cannot do anything but inspire reflection. It cannot do other than touch hearts and stimulate thoughts on the question of the organic development of the Roman Rite.

b) Apart from the rational or rationalizing character of the post-Conciliar liturgical reform, I think it is important to note that its execution in the late 1960's and the 1970's, in my part of the world, for sure, and in many other places as well, was marred by violence. It was imposed and all which had been before was taken away and proscribed. It was a break with the past which cannot be justified by any reading of the Apostolic Constitution on the Liturgy, hermeneutic or no hermeneutic. The ongoing, up to our day, saga of liturgical abuse and legal optionality, which seem to go hand and glove with the Ordinary Form, makes of it something quite arbitrary and hence laboring under of deficit of what Kwasniewski describes as, "... elements of holiness and “good form” ..." As one of my commentators observes, Peter's approach to enhancing the Ordinary Form, by adding or clarifying according to three principles (continuity, augmentation, mnemonic) seems like too much effort. Or as another commentator put it: as effort needed to change the people's hearts and prepare them for something else, namely a restoration, totally foreign to the experience of their life time, if, as most are, they happen to be under sixty years of age and still have not been exposed to the Extraordinary Form.

Recently, I saw pictures and video of two hierarchical liturgies which were celebrated in my beloved Caribbean region with all manner of singing and swaying and clapping after the popular manner. I will not take on anyone who insists that this is liturgy from the heart and after the manner of the folk. The point is not to deprive anyone of the means of self expression as Saul's daughter attempted in criticizing her husband, henceforth estranged, King David, dancing before the Ark of the Lord as it was being carried up to Jerusalem. The point is obvious, namely that processions are not Temple worship, any more than the popular devotion of a prayer meeting is the same as the Holy Sacrifice of the Mass. The ultimate tragedy of the last fifty years has been to radically narrow the Church's devotional radius to one act, depriving the Eucharist of its unique and sublime character. The major error of the rational reform was the banalization of  all by abandoning the once rich variety of devotions which characterized Catholic culture and its popular particularities outside of Mass in all the various parts of our great Catholic world.

I understand and respect what Kwasniewski is advocating. Some of it, like proper decorum in Divine Worship and celebration of the preparation of the gifts and the Eucharistic Prayer of all together directed ad Orientem, eliminating chaotic moments during the liturgy and slowing down the Communion procession by returning to the reception of Communion at the Communion rail, are not embellishments but options which should be taken and held without variance. Nonetheless, the intent of mutual enrichment would seem to be to expose people to the Extraordinary Form in all its glory or in the case of the Low Mass in all its noble simplicity. The author's three principles presume that priests are familiar with the Extraordinary Form. Maybe priests who find the hurdle to introducing the Extraordinary Form to their parishes as insurmountable should visit with confreres who have succeeded. Maybe seminaries should open up or loosen up (you choose the metaphor) to the Extraordinary Form under the rubric of "try it, you'll like it" and let the creativity of a younger generation of soon to be priests face the challenge of restoring the full spectrum of Catholic devotional life, leaving no one deprived of culturally correct self-expression, while at the same time allowing young and old to be caught up into the mystery of standing, sitting and kneeling before the Throne of God.

Restoration for the sake of organic development is not restrictive but rather particularizes and reopens a window to heaven. The didactic and the rational, the popularly devotional and expressive should not be given short shrift by being crammed into a scarce hour on Sunday morning or whenever you can cram it in on a regular, preferably weekly, basis. What else could it possibly mean to claim our world for Christ?

Posted by Thomas Gullickson at 12:10 PM