Getting Folks on the Same Page 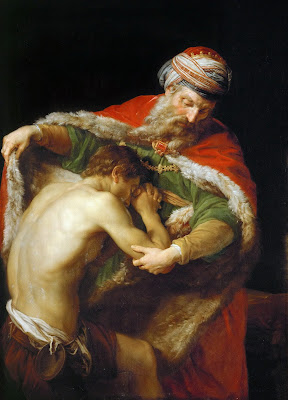 "Our consciousness of being children of God and of being secure in His all-powerful and all-wise love must provide the central presupposition from which we view everything, be it joy or misery, be it the tangible help of God or the apparent failure of our endeavors. He whose confidence in God is genuine will, whenever his failures or his relapses threaten to discourage him, flee into the arms of God with undiminished trust, entreat God’s help with increased fervor, and combat his defects with greater vigilance than ever." [(Kindle Locations 3010-3013). von Hildebrand, Dietrich (2011-02-04). Transformation In Christ. Ignatius Press. Kindle Edition.]

We are less than a month from the starting gun or bell (metaphor!) of a Synod of Bishops on the family which finds itself per force cloaked in preparations for the Jubilee Year of Divine Mercy, due to open not long thereafter. There is lots of contentious speech about in the blogosphere, whether your topic is the one, the other or both events. I'd love to avoid all of it, because it seems deconstructive generally, lots of tearing down seems to be in course. All of this spawns or seemingly gives permission for some very hateful statements by people who cannot help but be keeping Mother Church at arm's length. Alienating? I guess that kind of captures the moment and in the lives of Catholic people all up and down the hierarchical pyramid, active members of the worshiping community and all those people farther and far from the center of action.

Recently, I got wind of a very angry statement from a man I have known since he was a child. Basically and with surprising emotion, he struck out at bishops and priests who, he says, are obviously hateful people (I don't know if I am included or not), because they don't listen to all the lay people who were queried before all this and seemingly (at least from my man's perception from the media) like Pope Francis (sic) are willing to go with a majority vote of men and women on the street concerning questions like admission to Holy Communion of couples in irregular unions (divorced-remarried, etc.), plus the LGBT thing right across the board. I witnessed a woman whom I have known for a long time lash out in impatience at the Kentucky clerk who has gone to jail for failing to do her job and register same sex unions, my lady condemning the clerk, while brandishing the "who am I to judge" thing as it tends to be wielded. I wish there were more room for reasonable discussion in all of this, but that is where we are: hurting ourselves and hurting others badly.

What do you do when faced with such fury? What do you do with that big world whose life is obviously not centered on Christ, not hidden in God, because it gives no evidence of a practical and profound desire to turn to the Lord and seek for itself forgiveness and life, like the Prodigal Son in Luke's Gospel? We stand dumbfounded before the rage of the elder son and brother, and as if we were not loved by the forgiving father.

“Now his elder son was in the field; and when he came and approached the house, he heard music and dancing. He called one of the slaves and asked what was going on. He replied, ‘Your brother has come, and your father has killed the fatted calf, because he has got him back safe and sound.’ Then he became angry and refused to go in. His father came out and began to plead with him. But he answered his father, ‘Listen! For all these years I have been working like a slave for you, and I have never disobeyed your command; yet you have never given me even a young goat so that I might celebrate with my friends. But when this son of yours came back, who has devoured your property with prostitutes, you killed the fatted calf for him!’ Then the father said to him, ‘Son, you are always with me, and all that is mine is yours. But we had to celebrate and rejoice, because this brother of yours was dead and has come to life; he was lost and has been found.’” [Luke 15:25-32]

Please get my gist: the real dilemma or tragedy is that of the elder son, in not identifying the sincere repentance of the younger brother, who thereby expresses absolute confidence in his father, something the older man does not seem to possess. My man's rage may be evidently anticlerical, but it is also fundamentally anti-God. There isn't the foggiest there of Who God is and how He has chosen to save us in Christ and work with and for us in and through His Church. The issue is not one exclusively of sinners among the bishops and priests getting it wrong and barring the way to heaven, but of lots of folks with no confidence in Divine Providence and how that plays out in my life as an individual, begotten of God and loved by Him from all eternity and forever.

If I claimed to have a remedy for the situation, I guess any number of people would shout me down. But the remedy is in finding ourselves indeed lost and then getting about heading for home. The remedy is in the return, in the confession of being prodigal and returning without conditions. The remedy is in pronouncing judgment upon myself, turning around and heading home to the Father's mercy.

From the earliest days of the Church, right up until the Protestant Reformation in many parts of Europe, there were those who as public or notorious sinners sought the way back to inclusion in the assembly of the faithful by public penance and petition for prayers from those who had not so strayed. Whether through genuine contrition or social pressure, they found their place within the community of the Church by embracing their exclusion from Divine Worship, while standing or kneeling outdoors in the elements each Sunday, or by taking their place in the back of church, deprived not of prayers but certainly of access to Holy Communion. They, too, were anything but ostracized from the faith community. Maybe that discipline is too brutal for today; maybe times have changed. Parishes may not be cohesive enough to allow for something like that nowadays, but reincorporation into the family does not come from denying the fault or taking the Father for granted. Maybe the Father has to let some go; may He has to explain that mercy reaches out not to cover over but to be requited by sincere penance.

Other members of a family suffer much when someone violates the fabric of family life. What is missing too often today is the recognition both on the part of the sinner and of the community of the gravity of the sin. The elder son's tepidity could not comprehend the significance of his younger brother's repentance. We desperately need true sorrow for sin, born of real confidence in the Father's love, shining forth from the Church, the Body of Christ.

What we celebrate within the Church is the same as what the Father celebrated with the return of his errant son: we celebrate genuine, life-transforming repentance born out of confidence in God's love and in His power to save from everlasting death in and through the ministry of His Church. I wish to say to my man, to my lady and to so many more: "Come to the feast!" Come home as did the Prodigal Son! Accept the lowest place in your Father's House, because you have sinned, we have sinned, and He is full of gentleness and compassion.

The forgiving Father came out from the banquet, from the music and dancing, to invite the elder son to come in. He half apologizes in response to the rebuke of his son. In freedom, the Father could do no more; He couldn't very well do more for the big brother. We keep praying for that older son who somehow feels slighted because of his own refusal to surrender totally to love. We keep praying that hearts hardened by sin might melt and glow in the love of Christ our Savior. Enough confidence to surrender and accept the lowest place, in hopes of being called up higher at least on Judgment Day, is sorely lacking to us in this day and time.

Posted by Thomas Gullickson at 6:50 AM