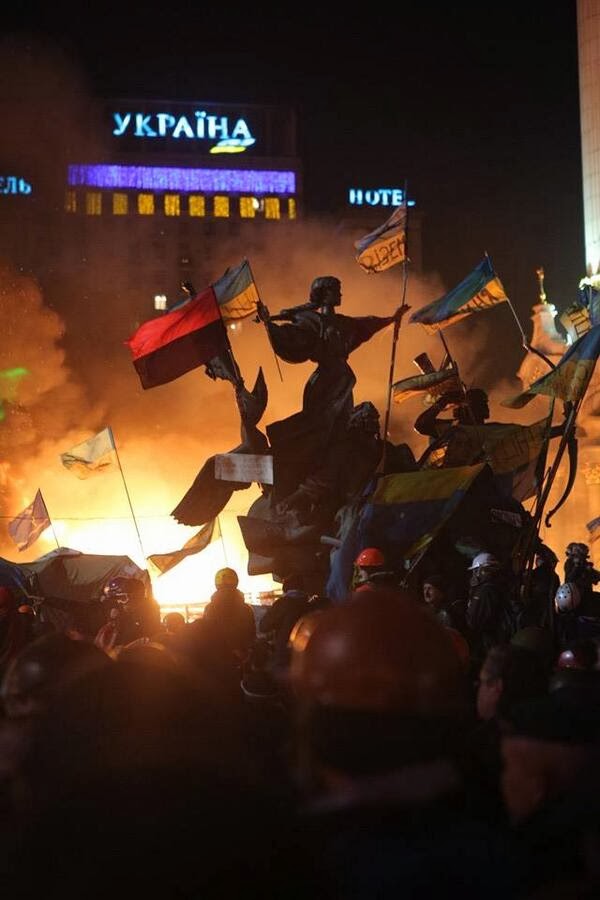 All great cities have their founding legends. Rome has Romulus and Remus. Kyiv has its namesake who settled on this spot, sailing here on the Dnipro with two brothers and a sister, whose names crown a little water course through the city and two of the heights on which the city is built. Seeing this monumental sculpture of the four founders silhouetted against the all consuming flames of Maidan under assault last evening was almost overpowering. Will Kyiv have to be founded anew? Will it have the resilience to quickly move on to better? In the midst of death, flames and wounding, I offer my fervent prayer that this might be so. This morning especially I offered Holy Mass for Ukraine: for the eternal rest in the embrace of our loving Lord and God for all who have died, for healing and strength for those injured, for protection from evil for this good people, for peace, reconciliation and the building up of the nation on the foundations of the noblest of human principles. May Ukraine find its way to Christ, the Redeemer of Mankind! 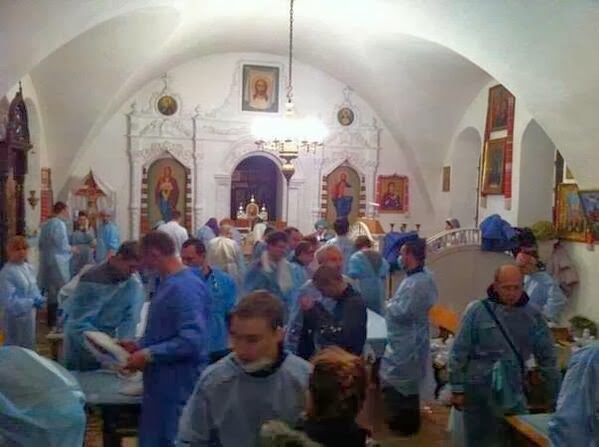 Since coming to Kyiv, early on, I once visited privately the beautiful refectory church of the Monastery of St. Michael of the Golden Domes. Prayers were being chanted on that particular day at that hour. Since yesterday, that sacred space has been dedicated to saving lives and binding up wounds, a truly noble consecration in a time of need. Let this image stand for my hope for the future of Kyiv and Ukraine. That the Lord in His Mercy might hear my prayer for all of those who give of themselves so generously for the sake of those harmed by the violence which has descended upon this good people!

Judging takes place before the Throne of God; you and I must only have reason to tremble for our own sins and failing, as well as praying that others turn away from the path of sin and be spared now and ultimately on the day of final judgment. May the Lord have Mercy, spare the victims, touch the hearts of sinners and bring all a new resolve for the sake of building up Christ's Reign here and now in His beloved Ukraine!

Among the Psalms which formed part of my prayer this morning was this one, which offered me perspective in putting me within that context of struggle in which God's People live this side of Heaven. To one and all: be of good courage!

Psalm 55
1 Give ear to my prayer, O God; do not hide yourself from my supplication. 2 Attend to me, and answer me; I am troubled in my complaint. I am distraught 3 by the noise of the enemy, because of the clamor of the wicked. For they bring trouble upon me, and in anger they cherish enmity against me. 4 My heart is in anguish within me, the terrors of death have fallen upon me. 5 Fear and trembling come upon me, and horror overwhelms me. 6 And I say, “O that I had wings like a dove! I would fly away and be at rest; 7 truly, I would flee far away; I would lodge in the wilderness; 8 I would hurry to find a shelter for myself from the raging wind and tempest.” 9 Confuse, O Lord, confound their speech; for I see violence and strife in the city. 10 Day and night they go around it on its walls, and iniquity and trouble are within it; 11 ruin is in its midst; oppression and fraud do not depart from its marketplace. 12 It is not enemies who taunt me— I could bear that; it is not adversaries who deal insolently with me— I could hide from them. 13 But it is you, my equal, my companion, my familiar friend, 14 with whom I kept pleasant company; we walked in the house of God with the throng. 15 Let death come upon them; let them go down alive to Sheol; for evil is in their homes and in their hearts. 16 But I call upon God, and the LORD will save me. 17 Evening and morning and at noon I utter my complaint and moan, and he will hear my voice. 18 He will redeem me unharmed from the battle that I wage, for many are arrayed against me. 19 God, who is enthroned from of old, will hear, and will humble them—  because they do not change, and do not fear God. 20 My companion laid hands on a friend and violated a covenant with me 21 with speech smoother than butter, but with a heart set on war; with words that were softer than oil, but in fact were drawn swords. 22 Cast your burden on the LORD, and he will sustain you; he will never permit the righteous to be moved. 23 But you, O God, will cast them down into the lowest pit; the bloodthirsty and treacherous shall not live out half their days. But I will trust in you. [NRSV Catholic Edition Bible. Harper Bibles (2011-11-15). HarperCollins. Kindle Edition. (pp. 518-519).]

Posted by Thomas Gullickson at 12:18 PM