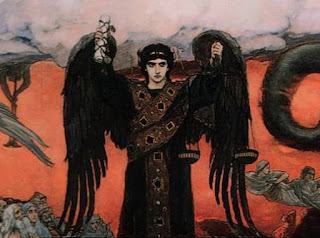 The first reading for this the 33rd Sunday in Ordinary Time, from Daniel 12:1-3, stirred up a few thoughts and reminded me of another powerful angel from the Apocalypse (from the back wall of the Cathedral of St. Volodymyr, here in Kyiv) which dominates the consciousness of many who live in this city:

‘At that time Michael will stand up, the great prince who mounts guard over your people. There is going to be a time of great distress, unparalleled since nations first came into existence. When that time comes, your own people will be spared, all those whose names are found written in the Book. Of those who lie sleeping in the dust of the earth many will awake, some to everlasting life, some to shame and everlasting disgrace. The learned will shine as brightly as the vault of heaven, and those who have instructed many in virtue, as bright as stars for all eternity.’

Just recently, the Holy Father presided at Vespers for the 500th anniversary of Michelangelo's fresco work in the Sistine Chapel. There the Last Judgment Scene dominates in incomparable fashion, but the whole ceiling draws us into a constellation very different from that of every day. There we are part, we are immersed in, joined to something monumental, yes, greater than us, but yet to which we very much belong. The Sistine Chapel acclaims the glory of God while affirming our dignity and destiny.


The Last Judgment in the Cathedral of St. Volodymyr, the Orthodox Cathedral not far from where I live and just up from the nearest metro station, is painted on the back wall over the main portal, confronting you, especially that angel with the scroll and the scales glowering back at you as you leave church after having made your visit and said your prayers. Victor Vasnetsov painted much more recently than Michelangelo (1862-1882) and maybe felt the need for a more deliberate confrontation of the sinner in his day and time? 19th Century Kyiv certainly wasn't Papal Rome at the time of Michelangelo, but maybe the two artists just chose different approaches to the same humanity, which since the dawn of time is steadfastly called by the Lord and His Church to adhere to the fundamental message: "Turn away from sin and be faithful to the Gospel!"

What can we say or how does either monumental fresco-ed rendition of the theme for this article of faith touch you or me today? Right at the beginning of what has otherwise been a truly enlightening book on the Crusades, the author, Thomas Asbridge shocked me by playing strange to man's fear of damnation, as if it were no more than a quirk of the Middle Ages. While he may have indeed written a definitive history and advanced the cause of scholarship concerning the period of the Crusades, Asbridge lifts the corner of the veil of his own life's light to show little more than darkness and confusion in his obliviousness to his own ultimate call and the profundity of the nature of his personal accountability before God, the Judge of the Living and the Dead.

Let today’s Gospel from Mark 13:24-32 speak to you again:
Jesus said, ‘In those days, after the time of distress, the sun will be darkened, the moon will lose its brightness, the stars will come falling from heaven and the powers in the heavens will be shaken. And then they will see the Son of Man coming in the clouds with great power and glory; then too he will send the angels to gather his chosen from the four winds, from the ends of the world to the ends of heaven.
‘Take the fig tree as a parable: as soon as its twigs grow supple and its leaves come out, you know that summer is near. So with you when you see these things happening: know that he is near, at the very gates. I tell you solemnly, before this generation has passed away all these things will have taken place. Heaven and earth will pass away, but my words will not pass away.
‘But as for that day or hour, nobody knows it, neither the angels of heaven, nor the Son; no one but the Father.’

There is nothing idle about living within the context of eternity, focused on that day and hour which is as yet hidden. Rather, human industriousness at any level below that of living and working within, as a part of, that constellation where we are part of God's life sells us short. Noah's flood has past and we live in a world destined for fire. To ignore that or deny it probably explains best the sense of the scowl on the face of Vasnetsov's angel.

As another Church Year draws to a close, we are called to accountability, to make the needed adjustments in our trajectory, such that we remain within that constellation where our Creator and Savior has placed us.

Posted by Thomas Gullickson at 5:30 PM