Don't Rain on my Parade? 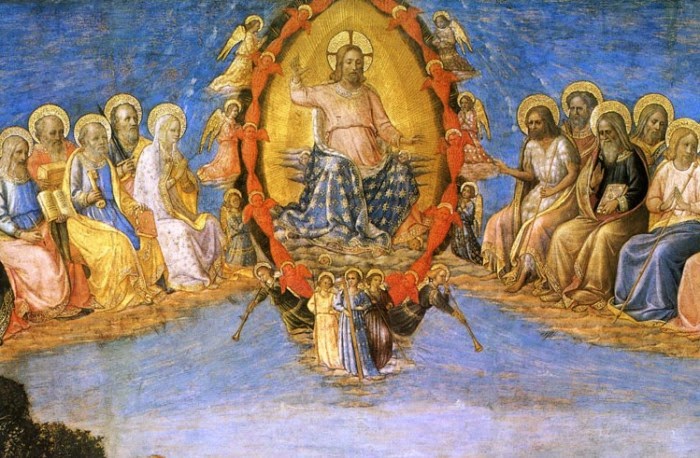 I think I troubled my early morning "Christ the King mood" by reading an article in the National Review Online rubric "Postmodern Conservative". The article by Peter Augustine Lawler is entitle Against Rage and Despair (you can see how entrapment of good Christians sometimes happens: seeing the rubric, I should have steered clear!). The article seems to be an encouragement to cultivating wholesome friendships as the path through life's storms. (as in period)?

Without wanting to criticize anybody, let's just say that in the face of such I find myself again invited to look beyond the grass which withers and the flower which fades. Yes, Peter, I noted that you referred to the Lord as friend, too! Ultimately, however, our faith is more than an all too human intimacy based solidarity with Jesus: the Song of Songs motif does not stand alone at the pinnacle of our spirituality. The Lord is King, in splendor robed, robed and girt about with strength! The whole thing is about principalities and powers and my loving Lord is indeed more than a friend in time of need, He is my Rock, my Fortress, my Deliverer.

In a little mosaic of quotes from the Book of Revelation, the Church teaches in the First Reading from today's Office of Readings:

"Grace and peace to you from him who is, who was, and who is to come, from the seven spirits in his presence before his throne, and from Jesus Christ, the faithful witness, the First-born from the dead, the Ruler of the kings of the earth. He loves us and has washed away our sins with his blood, and made us a line of kings, priests to serve his God and Father; to him, then, be glory and power for ever and ever. Amen.
It was the Lord’s day and the Spirit possessed me, and I heard a voice behind me, shouting like a trumpet, I turned round to see who had spoken to me, and when I turned I saw seven golden lamp-stands and, surrounded by them, a figure like a Son of man, dressed in a long robe tied at the waist with a golden girdle. His head and his hair were white as white wool or as snow, his eyes like a burning flame, his feet like burnished bronze when it has been refined in a furnace, and his voice like the sound of the ocean. In his right hand he was holding seven stars, out of his mouth came a sharp sword, double-edged, and his face was like the sun shining with all its force.
When I saw him, I fell in a dead faint at his feet, but he touched me with his right hand and said, ‘Do not be afraid; it is I, the First and the Last; I am the Living One, I was dead and now I am to live for ever and ever, and I hold the keys of death and of the underworld. To those who prove victorious, and keep working for me until the end, which I myself have been given by my Father, to rule them with an iron scepter and shatter them like earthenware. And I will give him the Morning Star. I shall not blot their names out of the book of life, but acknowledge their names in the presence of my Father and his angels. Those who prove victorious I will make into pillars in the sanctuary of my God, and they will stay there for ever; I will inscribe on them the name of my God and the name of the city of my God the new Jerusalem which comes down from my God in heaven, and my own new name as well. Look, I am standing at the door, knocking. If one of you hears me calling and opens the door, I will come in to share his meal, side by side with him. Those who prove victorious I will allow to share my throne, just as I was victorious myself and took my place with my Father on his throne."
[Apocalypse 1:4-6,10,12-18,2:26,28,3:5,12,20-21]

Gospel? Good News? How about getting across the message that in stating that we are loved first and foremost by God, truly we are also jumping up and shouting that in that everlasting love we are not only affirmed, but caught up into the sublime. If I but respond to the grace extended by Him Who stands at my door and knocks, then nobody, but nobody will ever rain on my parade!

Posted by Thomas Gullickson at 10:39 AM