The Enduring Part of the "Fireworks" of the Faith 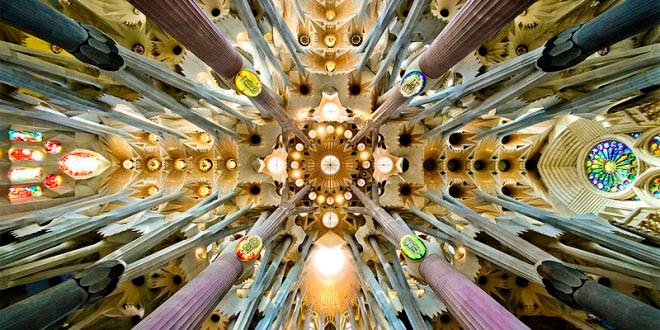 Today's Gospel from Luke 21:5-11 got me off on a tangent and to thinking about how the Church grows and spreads in time and space:
"When some were talking about the Temple, remarking how it was adorned with fine stonework and votive offerings, Jesus said, ‘All these things you are staring at now – the time will come when not a single stone will be left on another: everything will be destroyed.’ And they put to him this question: ‘Master,’ they said ‘when will this happen, then, and what sign will there be that this is about to take place?’
‘Take care not to be deceived,’ he said ‘because many will come using my name and saying, “I am he” and, “The time is near at hand.” Refuse to join them. And when you hear of wars and revolutions, do not be frightened, for this is something that must happen but the end is not so soon.’ Then he said to them, ‘Nation will fight against nation, and kingdom against kingdom. There will be great earthquakes and plagues and famines here and there; there will be fearful sights and great signs from heaven.’"

Obviously, living in Ukraine it is not hard to take such words of the Lord almost literally and to fixate on the menace which refuses to let Ukraine live at peace, sovereign within its 1991 borders. That is another matter and actually my distraction was quite another. Beyond thoughts about these days maybe being the end times or that simply here we have no lasting dwelling, and that we should never put our confidence in monuments of stone, I was asking myself where we as a Catholic Church, whether Byzantine or Roman, can call ourselves to home. What entitles us to say that we are established in a given place, that we belong there and must not move on?

Years ago at an archaeological exhibit in Jerusalem on early Christian churches in the Holy Land, I learned about the countless little churches built there of stone and all having similar hollow cornerstones. Archaeologist speculated on what might have been the content of these cornerstones until they found a couple still intact after more than a thousand years. They were full of coin and inscriptions led one to conclude that, way back then to slow the pace at which wealthy people were building and endowing  these lovely little churches, local bishops had established the rule that the cornerstone had to contain equal value in coin to assure the church's repair or restoration at need. No one was allowed any one shot flashy "fireworks", if you will, but provision for the ordered growth and maintenance of places of divine worship was assured by making the donor or benefactor pay twice.

I guess that is not our problem anywhere in the world today; correct me, but I don't know of any place where people are standing in line for permission to help with church building. Today's rich and famous aren't begging to build houses of worship. Most of the big charitable funding agencies won't even give you a second look if in your poverty you tell them what you really need is a church building for your people. Clinics, social halls, maybe, but not a church or a chapel, please! And yet, it seems to me that it is the place where we worship God Almighty, where we give Him His due, that defines us for who we are as His people. But how do you do that in the absence of people with means when you are for all practical purposes destitute yourself? Israel under tents for forty years in the desert!

One of the great parts of the story of the Pontifical Society for the Propagation of the Faith, the Mission Societies, was making the establishment of the Church possible in places where it wasn't yet or wasn't strong enough to stand on its own. From the very first days of Christ's Church we've known that God's People are destined for more than cemetery space, more than worshiping in the catacombs, if you will. We admire churches for their beauty, for their majesty and size in some cases, but more importantly we admire them as ongoing projects in brick and mortar, marble, glass and steel, which like the legendary Gothic cathedrals are never really completed. Church buildings mark where we stand and where we belong on God's earth.

I think of the just over one hundred years of my home town cathedral, which has been lovingly roofed and tuck pointed a couple of times in that century, which has known four distinct altars of celebration over the course of those years and two major renovations, leaving aside stories about stained glass, baptisteries and pipe organs. Church art and architecture is an expression of devotion toward God, a testimony of faith, but just as importantly, it is a clear statement about the Church's belonging.

Maybe it is too much to say, I build and therefore I am, but by way of a negative statement, impeding a faith community in its building a house of worship is fundamental aggression against who I am as Church. As the so-called "caliphate" demolishes ancient Christian churches it not only destroys a monument to the past, it denies to the community today its ongoing project of realizing itself in worship of the living God, yes also through building and restoring again and again that proper and sacred space.

"Jesus said, ‘All these things you are staring at now – the time will come when not a single stone will be left on another: everything will be destroyed.’ " Yes, Lord, most assuredly, but until You come again I'll need to get back to building and seeking out that coin which maybe I don't possess in sufficiency to see to it that the project goes on and Your Church of Living Stones has a face and a foothold in this world.

Posted by Thomas Gullickson at 10:04 PM