Beyond Form to Substance 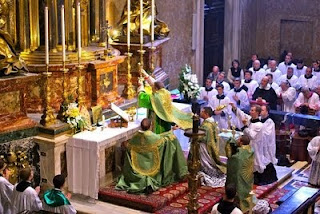 "At this mention of rising from the dead, some of them burst out laughing; others said, ‘We would like to hear you talk about this again.’ After that Paul left them, but there were some who attached themselves to him and became believers, among them Dionysius the Areopagite and a woman called Damaris, and others besides." [from today's first reading from Acts]

'We would like to hear you talk about this again.’ St. Paul's experience in Athens from the Acts of the Apostles, of trying to enter into dialogue with Greeks in the marketplace of ideas, the Aereopagus, bore little fruit by comparison with his other proclamations of the good news. Paul was a constant; the listeners seem to have been the variable. Here in Athens, we can say that hearts were closed to Paul and to Christ, Whom Paul proclaimed risen and victorious over sin and death. The proclamation is not what it is intended to be if it doesn't touch hearts and change lives.

Maybe that is why I am hesitant about the pragmatic approach, as outlined in a blogpost of 1Peter5 reacting to the latest study on the drop in the number of mainline Protestants and of Catholics in the U.S.  The author would have us look at the modus operandi of those whose numbers are up, that is, to compare success formulas. Part of the solution, he says, is that we are not serious enough; we need to roll up our sleeves, throw out the felt banners (sic) and get serious (here):

"Until we take our Faith seriously, no one else will either, and many will realize it is better to just leave instead of waste their time with people who, for all intent and purposes, appear to be just going through the motions. This applies across the board: liturgically, doctrinally, and socially. Once Catholics decide that the Faith of Sts. Peter and Paul, St. Athanasius, St. Francis of Assisi, St. Ignatius of Loyola, St. Therese of Avila and Mother Teresa of Calcutta is a Faith worth living – and a Faith worth dying for – then perhaps it will again become the attractive force it has been for centuries."

The crowd on the Areopagus took Paul seriously enough, as he was most serious in his approach, but just a couple of them took his words to heart and followed. We need to give of ourselves wholly to Christ in faithfulness to His Church, but a certain openness on the part of the listener, perhaps the bigger part in this mysterious freedom equation of call and response in cooperation with God's grace, is key. We cannot make ourselves irresistible.

Years back, I asked an older and wiser bishop friend if the trend of Catholics to gravitate toward "mega churches" worried him. He said not at all, because most those who went were Catholic in name only and desperately in need of evangelization and catechesis. He said that from his observation many of these phenomena were revolving doors, offering to not few the pre-catechesis they needed to open their hearts to the Gospel and to the fullness of faith in the Catholic Church.

Cor ad cor loquitur. Where does heart to heart take place? Why did even the Twelve have its Judas?

No, if we need to get serious, if we need to clean up our act, well that is fine. I still think we should give more space to supplication. I'm sure Paul prayed a lot, maybe he even fasted before going to the Areopagus. We need to do the same and then still not be surprised when people, yes, even of our own household turn their backs on us and not necessarily go over to the competition, but just go away, with or without a justification.

St. Charles Borromeo encouraged or admonished his priests at Milan to batten down the hatches. We need to do the same, but the only serious thing to do is to place our lives entirely in God's Hands. And to Jesus through Mary!

Posted by Thomas Gullickson at 4:39 PM