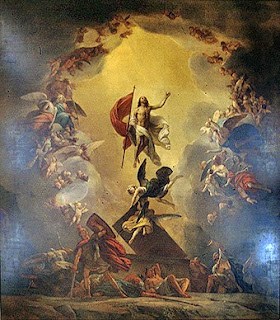 "Dearly beloved, through all this time which elapsed between the Lord’s Resurrection and Ascension, God’s Providence had this in view, to teach his own people and impress upon their eyes and their hearts that the Lord Jesus Christ had risen, risen as truly as he had been born and had suffered and died.
Hence the most blessed Apostles and all the disciples, who had been both bewildered at his death on the cross and backward in believing his Resurrection, were so strengthened by the clearness of the truth that when the Lord entered the heights of heaven, not only were they affected with no sadness, but were even filled with great joy.
Truly it was great and unspeakable, that cause of their joy, when in the sight of the holy multitude the Nature of mankind went up: up above the dignity of all heavenly creatures, to pass above the angels’ ranks and to rise beyond the archangels’ heights, and to have its uplifting limited by no elevation until, received to sit with the Eternal Father, it should be associated on the throne with his glory, to whose Nature it was united in the Son."


St. Leo the Great
Posted by Thomas Gullickson at 9:03 AM