Wretch that I am, every once in a while I must indulge myself in Hilaire Belloc's swashbuckling. I've done it again and with no regrets! It's no spoiler, as the value of this adventurous book is found in the course of following his reasoning and analysis, and so I can quote his conclusion:

"So things have gone. We have reached at last, as the final result of that catastrophe three hundred years ago, a state of society which cannot endure and a dissolution of standards, a melting of the spiritual framework, such that the body politic fails. Men everywhere feel that an attempt to continue down this endless and ever darkening road is like the piling up of debt. We go further and further from a settlement. Our various forms of knowledge diverge more and more. Authority, the very principle of life, loses its meaning, and this awful edifice of civilization which we have inherited, and which is still our trust, trembles and threatens to crash down. It is clearly insecure. It may fall in any moment. We who still live may see the ruin. But ruin when it comes is not only a sudden, it is also a final, thing.

"In such a crux there remains the historical truth: that this our European structure, built upon the noble foundations of classical antiquity, was formed through, exists by, is consonant to, and will stand only in the mold of, the Catholic Church.

Naturally, such reading and my recommendation is reserved to Belloc and Chesterton enthusiasts. If you haven't got the "bug" you might put this book down prematurely. Even so, I will risk recommending it. For me personally, it puts a certain spin on my other favorite authors (like John Senior), who yoke classic Western Culture and Catholic Faith. Throw in Belloc on the topic of faith and culture and you may begin philosophizing seriously about which came first? The chicken? or The egg?

No doubt some will reprimand my "political incorrectness", coming as it does on the verge of a big Reformation anniversary, for recommending such an ecumenical wet blanket, but I will stand by the "redeeming social value", yes, even of Hilaire Belloc.

Pace George Weigel's Evangelical Catholicism, I doubt if even a 100 years ago Belloc swept away all adversaries by the force of his arguments. Moreover, given my origins, I doubt if anyone would accuse me of wanting to make unqualified Eurocentrism a necessary qualifier of Catholicism and a premise for the Faith fulfilling the evangelizing mission Christ entrusted to His Church. Even so, in Belloc I find an ally against the tyranny of relativism so rightly condemned not only as the death of thought, but as that fault which deprives us of any vitality or hope.

From my Sitz im Leben, I have to add that if Europe were Catholic to the hilt, it probably would not be speechless before the propaganda machine which from Moscow out thumbs its nose at our world and lays claim to titles and property for which it has no claim.

Give me those old "G" rated movies in black and white where the whole theater could nod agreement when wisdom personified as somebody's grandma could respond to tragedy and hardship by saying, "I just don't know where we'd be without our faith!" 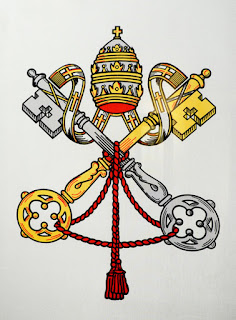 Posted by Thomas Gullickson at 1:58 PM