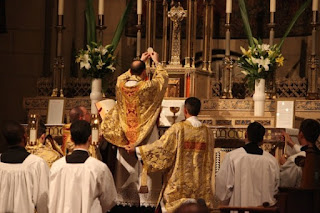 Yesterday I had the treat of assisting at what would be the equivalent for us Roman Catholics of vespers and matins in the Ukrainian Greek Catholic Cathedral here in Kyiv. Because of the two week difference in our calendars (Gregorian vs. Julian), it was not yet second vespers of the Assumption but the regular vigil office of the post-Pentecost season, organized with a summer outdoor concert of classical music, for the anniversary of the Cathedral's dedication. After three hours of singing and praying, including a procession around the outside of the church, I begged off the concert and took my old bones home to bed. It was a perfect night, especially since I could assist at the liturgy in choir.

One of the things which struck me during the office were its intricacies and, by the same token, its limpidity. This was especially true for the veneration of the book of the Gospels which included the proclamation of the passage on the vocation of St. Peter. Such long and elaborate Byzantine Rite celebrations of the Divine Office are more typical of the monastic office, but obviously, from my observation of the congregation, not at all unfamiliar to a regular congregation at the Cathedral in Kyiv.

Reflecting quietly to myself on our own liturgical situation on the way home in the car, it struck me that this is perhaps the greatest tragedy we suffered in the post-Conciliar reform of the Roman Rite, apart from all the abuse which crept in, of course. The rationalizing of word and gesture deprived us generally, yes, of the sacral nature of our worship and prayer, but also banned the intricacy of all that was, which as I witnessed last night in church is far from foreign to the men and women of today, no, it is perfectly comprehensible and more accessible, if you will, than what we do. What I want to say is that I was struck last evening by how counter-intuitive rationalizing is to what liturgy is really about. I note a very simple thing, which was the presiding bishop's changing vestments twice in the course of the liturgy, once for the procession and again later to full hierarchical vestments, so before and again in between with simple choir dress = three changes, really. Rational, not, but certainly comprehensible and appreciated by all who participated in the office.

I know what got my thoughts channeled this way; it was a sensational headline for an article which appeared on a web site offering devotions and direction for the Roman Catholic Man. I am not generally taken in by the sensational, what with all the disinformation about Ukraine that I have to deal with day in and day out, but I guess the headline: BREAKING: CATHOLIC CHURCH IS RETURNING TO AD ORIENTEM WORSHIP! did nonetheless turn my head. All I can say is "I wish it were so", and yesterday as opposed to today or tomorrow.

Returning to the intricacy of traditional worship, with all its formalism, may seem contrary to good sense, but I fear the rationalizers are no better than the iconoclasts. Such efforts from the past are rightly perceived as attacks and reparation needs to be made through restoration. I wish that bishops and seminary rectors would understand that the first best step on the road to recovery and relevancy is the choice always and everywhere possible of orienting Divine Worship. The above cited article offers all kinds of reasons but ultimately it all boils down to one: we need again to turn to the Lord with all our heart, mind, soul and strength... starting from our posture.

Posted by Thomas Gullickson at 11:23 AM