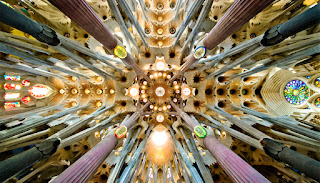 As he was now approaching the path down from the Mount of Olives, the whole multitude of the disciples began to praise God joyfully with a loud voice for all the deeds of power that they had seen, saying, “Blessed is the king who comes in the name of the Lord! Peace in heaven, and glory in the highest heaven!” Some of the Pharisees in the crowd said to him, “Teacher, order your disciples to stop.” He answered, “I tell you, if these were silent, the stones would shout out.” (Luke 19: 37-40)

I spent my Friday evening on YouTube with another Timothy Snyder lecture, another great one also because it synthesizes his historical observations on what is at stake in the ongoing crisis which finds its focal point here in Ukraine. Perhaps because Snyder is a historian and not a political commentator, he does not seem to want to prognosticate about an imminent and game-changing downfall of Russia; he remains of the idea that Russia's obsession with the notion that bigger is better will continue to be played out no matter what. Part of Snyder's thesis concerning the conflict between Russia and Ukraine rests on a shared vision of the importance of Europe but with opposite conclusions concerning its implications for their respective countries: Ukraine drawn toward the EU and Russia repulsed by the very thought of it, if you will.

Needless to say, it would be presumptuous of me to try and challenge the view of a man who knows more about the last 200 years of the history of the European continent and the atrocities of Stalin's Great Terror and Hitler's Holocaust than most anybody. Nonetheless, living and working here in Kyiv now for four years, sharing much with many ordinary and great people, and having done my best to study the so-called "revolution of dignity" which found its focal point here on Maidan and continues steadfast in its devotion to its martyrs and confessors, I find the notion both forced and patronizing that Ukraine's longings and its energy come out of some almost chemical suspension like a precipitate reducible to a longing to be part of recent history's third "great idea" for Western Civilization, the European Union.

Let's just blame it on the Enlightenment and move on! The EU was not and never will be enough for my friends and acquaintances here in Ukraine. People here did not make the sacrifices they did, take the risks with life and limb which they took for some European dream. As valuable as is the insight that civil society is or can be an agent working over and against oligarchy and corruption for the sake of justice and peace, articulated through the establishment of the rule of law, there is a greater and individual component in play in this world which is Ukraine. The truth about man, created in the image and likeness of God, cannot be so easily stifled, even in the hearts of people officially deprived of knowledge of the living God under generations of sovietism and materialism. There is within many people, great and small, the profound awareness that they are endowed by God with dignity and hence with certain inalienable rights. This is not utopian, it is imminent and goes before and far beyond building any sort of metropolis. The makeshift barricades and fortifications of Maidan were this for me: an essential stance over and against the powers at work to deprive man of his nature coming forth from God.

In the question and answer session after his lecture, Snyder is asked what the US or Europe can do for Ukraine and whether defensive weapons to fight off Russian aggression might help bring this all to a quicker and happier conclusion. It may be unfair of me to judge the professor's response as noncommittal; perhaps he is remaining faithful to his thesis that Russia and Ukraine are clashing over opposing reactions to a common view of Europe. Granted: a battle field victory no matter how decisive would not be enough; corruption must be rooted out of this country. I don't think a day goes by when I don't read something about someone's frustration with the Ukrainian government's foot-dragging on genuine reforms. Let's blame that on Enlightenment mindsets as well. We need to think our way out not only of corruption but out of the tyranny of liberalism, which holds not just Europe but most of our world in thrall.

I guess I'm wishing and praying for Ukraine, for Russia, for our world a saving and transforming encounter with our meek and humble Savior, that all might sing His praises before the stones cry out the truth about God and the world.

Posted by Thomas Gullickson at 11:17 AM