“No, I think a little better. We look back already to the time of the persecution as though it were the heroic age, but have you ever thought how awfully few martyrs there were, compared with how many there ought to have been? The Church isn’t a cult for a few heroes. It is the whole of fallen mankind redeemed. And of course just at the moment we’re getting a lot of rather shady characters rolling in, just to be on the winning side.” (Kindle Locations 1876-1879).

In my own fashion, I am trundling along reading books which should have formed my youth and lightened decades long past. For that, perhaps, I enjoy them all the more, and cannot accept that with retirement on the horizon my days of learning have come to an end.

I've read a lot of Waugh short stories and kind of mistrust him as a trifle too lenient or sympathetic toward the dissolute living of youth. Perhaps he is just too clever for me in so treating his characters. The greatness of his art on this very point comes shining through in Helena, where he sketches a very complex or nuanced, to say the least, sanctity for the empress dowager. He's positively merciless in his depiction of Constantine.

Helena is a very different type of hagiography. Perhaps it would be better to say that it isn't hagiography at all, despite the depiction of Helena's fasting and prayer which led her to find the true Cross.

It could be in the above quote that Waugh was describing the phenomenon of Christianity's transformation into a religion of state. I'm not so sure he doesn't have something to say about Catholics not only back then or in his day but in ours as well: "The Church isn’t a cult for a few heroes. It is the whole of fallen mankind redeemed." 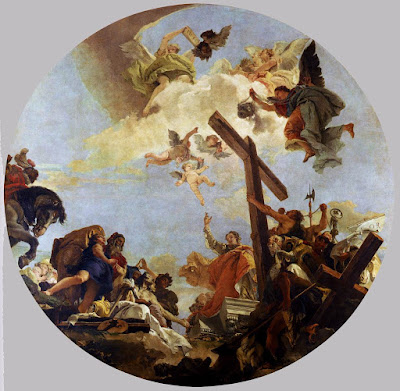 Posted by Thomas Gullickson at 4:03 PM