Flailing, but not without hope 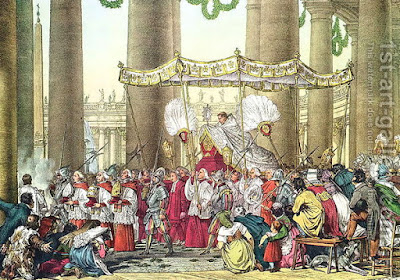 Not long ago, I watched a video made by two hikers who freed a young hawk from a bull snake's strangulation hold. No doubt the naturists in the crowd might protest this human interference which deprived the bull snake of his part in the food chain, but I want to focus if I may on the stage whispers in the video, wondering if the hawk had already suffocated or if his wing had been broken in the snake's grip.

My stage whisper utters something of my worries about our faith in the True Presence of Christ in the Eucharist and concerning the Church's constant and inerrant teaching about the transubstantiation. The "reformers" of the past who distanced themselves from the body Catholic and those of our present day (from within the sheep fold) continually resort to sacrilege as a means of dulling the faith or depriving God's people not only of faith in but of the Most Blessed Sacrament Itself. The latest violation documented for us by the world press has been the distribution of Holy Communion out of baggies (paper or plastic, you choose) at a mega-mass in Latin America (here ).

Faith in Christ, truly present Body, Blood, Soul and Divinity, and in the hearts not only of God's little ones, is not so robust as to survive constant trivializing. We take more care in wrapping the dumbest present brought to the home of somebody hosting a dinner party. Distribution of Holy Communion just cannot be done without harm in such big crowds and somebody is called to defend the faith from its being lost entirely to banality.

What is at stake here is much more than theater. Theater as such goes both ways, whether as depicted in the colored etching of a Papal Corpus Christi Procession from a bygone era or from the photos in the link above. As pastoral initiative, however theatrical, I will choose the procession any day. Prior to the reform of fifty years ago, the Holy Sacrifice had its proper context and outdoor processions even with the Blessed Sacrament were the exception (viz. Corpus Domini); the distribution of Communion outdoors except at a Mass before battle, in the form of Viaticum for the soldiers, was unheard of. Maybe it is time again to confine the celebration of the Eucharist to the protective four walls of the temple and resort to processions, whether with the Sacrament, with blessed palm branches, candles or crosses, as the means of edifying the larger gatherings outdoors.

I rather suspect that the young hawk was getting his just desserts for swooping down on the bull snake, sunning himself and minding his own business, when a feathered meal gave him a peck he could not ignore. Were it not for the hikers, the hawk would have met his end in short notice. May the Lord as He passes by look with mercy upon us and intervene to spare us from the grasp of banality, no matter when or where. Fear and trembling is more than good theater; it is our salvation.

Posted by Thomas Gullickson at 12:07 PM