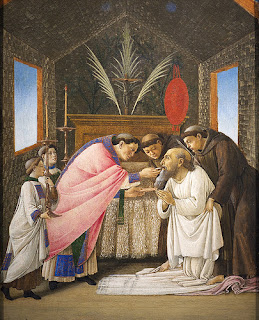 This headline got me wondering about what people think and where they are at in the Church today (at least what those who write headlines might be thinking). Specifically, where does the expression "skip Communion" come from? Is that as in "I think I should go to confession (e.g. as I missed Mass last Sunday through my own fault) before I go to Communion again"? Hence, I better skip Communion.... To say it otherwise, I can't quite imagine my dear friend Archbishop Vigneron of Detroit saying that if you support gay marriage, it would be best if you just skipped Communion. The whole thing is somehow off; it does not ring true. There's nothing of the Godhead in this choice of language.

The notion of "skipping Communion" is, yes, too flippant for one thing, but for the rest, the headline gives the impression of a break in routine. We skip class, we skip taking a vitamin, we skip a meal, but there is something course about the idea of "skipping Communion" as if we were talking about something quite ordinary. In advocating the homosexual lifestyle as something neutral for Catholic faith, you are advocating something which is gravely wrong, even if you do not so indulge yourself. You are giving scandal by denying time-honored and true teaching. The notion that you should just skip Communion on that account, well sorry, but it does not work for me. You can string together countless shrugged shoulders and clueless grins, but, please, don't put Holy Communion in the category of things you, well, sort of skip.

Perhaps this is indicative of the real gravity of the rupture which followed the post-conciliar liturgical reform: reception of the Lord Our Savior, Body, Blood, Soul and Divinity, becomes not something from which I abstain, being aware of having committed grave sin and hence being totally unworthy, but rather it is something I may be well advised to skip. Sad! How far can one get from the reverence involved for one and all in St. Jerome's last Communion before his death, as pictured above.

In his writings, St. Louis de Montfort describes the deliberateness with which one prepares to receive Christ in Holy Communion; what he says about the devotion one should strive for is quite foreign to today's parish everyday and I make that observation with regret.

A friend on Facebook the other day was asking advice on how he could recover months of archival notes, which he had accidentally cancelled from his notebook computer. Once recovered, he duly rejoiced to have the fruits of his labor back in his possession. By analogy, we need to reflect upon the pearl of great price and the anything but routine nature of processing up to receive our Divine Master in Holy Communion.

We need to recover life's passion, life as centered in the Holy Eucharist.

Part of the Protestant Reformation in England involved stripping and destroying the altars in the churches, but it also included destroying the joyful noise of the hand bells rung at the consecration and during processions with the Blessed Sacrament. The senses were dulled in the 16th Century, as to a certain extent have been ours today. My plea to headline writers would be not to short change teaching by banalizing it with a just skip it. I know the authorities in Detroit had more to say and teach about the worthy reception of Communion.

Posted by Thomas Gullickson at 3:25 PM