Disposable Income: a blessing or a curse? Not. Neither. 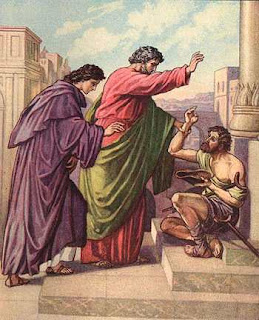 This CWR article by Carl Olson got me thinking about whether it is right to say that of late the middle class (typical Americana talk for somebody not rich or poor) has been ignored or neglected in papal discourse. I came to the tentative conclusion that "class" vocabulary is not where we are at and since forever, when it comes, among other things, to framing moral discourse. We need to look to our duties vis-a-vis the poor in a different way. We need to be more evangelical in our approach; it would be hard to make the case for the Gospels or St. Paul having singled out a class of people as addressees for talk about coming to the aid of the needy. Even in the Acts of the Apostles it would seem that charity is bestowed at eye level or, if you will, in the midst of folk: there simply isn't a center and a periphery, nor is there an up and/or a down.

"When he saw Peter and John about to go into the temple, he asked them for alms. Peter looked intently at him, as did John, and said, “Look at us.” And he fixed his attention on them, expecting to receive something from them. But Peter said, “I have no silver or gold, but what I have I give you; in the name of Jesus Christ of Nazareth, stand up and walk.” And he took him by the right hand and raised him up; and immediately his feet and ankles were made strong." (Acts 3:3-7)

A penniless Peter and John move to the aid of a beggar and redirect his whole life. The scene involves no transfer of money or goods but a superlatively human exchange which leads a man to strength in Christ.
The other week in Krakow, Poland I encountered a very different type of begging poor (not unlike Rome) from the people I see on the streets of Kyiv. One insightful friend who knows Krakow much better than I do (this was my first visit) explained that as the city is a tourist mecca begging is organized and aggressive, whereas in Kyiv, also because of the war in Ukraine, the influx of tourists the city once knew is no more; there's no big money, if you will, to be gained by seeking an alms. Here for the most part on the street you meet regular folk and generally they, the regular, being of modest means. Hence, you witness the typical behavior of Kyiv's beggars as discrete; they tend to kneel, sit or stoop by the side of the road with head bowed, with hand or paper cup extended in supplication: even in a city of three million, begging is not a confrontation of the stranger but an anxious almost embarrassed plea to a neighbor.

When I was a boy, people throughout the Midwest generally did not lock their houses. There were no TV's or stereos or phones or laptops or anything to be stolen; most folks had vegetable gardens with tomatoes, radishes, perhaps carrots and cucumbers. The greatest risk you ran on a scorching hot summer day, parking your car downtown in a small community, leaving the windows open, would be that on your return you would find that someone had gifted you with a bag of freshly picked cucumbers from their garden, more than they could eat and in the face of everyone else's abundance and lack of cash, not to be sold for no matter how little. In the culture, if you didn't have your own garden, it was a pleasant gift for the table. Abundance, such as it was, was being shared within the community.

My first thought in proposing a more evangelical approach to charity than the responsibility devolving upon the upper or more fortunate classes of society was the idea of talking about disposable income or goods (like cucumbers in season). Even here however, while on right grounds from a humanitarian point of view, I don't think we've entered into the essence of the encounter between Peter and John and the beggar at the Beautiful Gate of the Temple. Miracle of healing aside, Peter and John communicated saving good news in and through the Name of Jesus, which is above every other name. Certainly, my excess (that extra shirt in the closet, if you will) belongs to those who have none, but I need to learn to give like Peter and John. That is anything but "social gospel".

Olson titles his article: "The hyperbolic and exhausting papacy of Francis" and he appeals to the authority of Elisabeth Scaglia's fatigue... Let me be a child and long to repeat the act of Peter and John at the Beautiful Gate, to speak the Holy Name with power and conviction, fully expecting something greater and better than my miserable coin to happen. But let me do it at eye level and out of love for my neighbor!

Posted by Thomas Gullickson at 1:00 PM