Isn't it Bigger than "Canary in the Coal Mine Type" Man sort of Things? 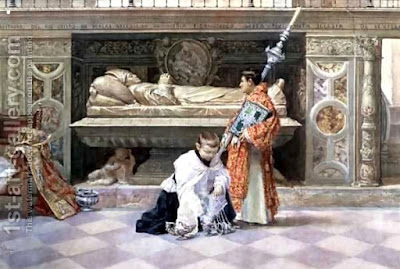 "Granted such a world let us take the second point and see what was the distance in mere time between this early third century of which I speak and what is called the Apostolic period; that is, the generation which could still remember the origins of the Church in Jerusalem and the preaching of the Gospel in Grecian, Italian, and perhaps African cities. We are often told that changes "gradually crept in;" that "the imperceptible effect of time" did this or that. Let us see how these vague phrases stand the test of confrontation with actual dates.

"Let us stand in the years 200-210, consider a man then advanced in years, well read and traveled, and present in those first years of the third century at the celebration of the Eucharist. There were many such men who, if they had been able to do so, would have reproved novelties and denounced perverted tradition. That none did so is a sufficient proof that the main lines of Catholic government and practice had developed unbroken and unwarped from at least his own childhood. But an old man who so witnessed the constitution of the Church and its practices as I have described them in the year 200, would correspond to that generation of old people whom we have with us today; the old people who were born in the late twenties and thirties of the nineteenth century; the old people who can just remember the English Reform Bill, and who were almost grown up during the troubles of 1848 and the establishment of the second Empire in Paris: the old people in the United States who can remember as children the election of Van Buren to the office of President: the old people whose birth was not far removed from the death of Thomas Jefferson, and who were grown men and women when gold was first discovered in California." (Belloc, Hilaire (2012-05-17). Europe and the Faith "Sine auctoritate nulla vita" (pp. 48-50). Kindle Edition.)

I was pleased, most pleased to read Joseph Shaw's latest paper, this one on the liturgy, men and the tradition (here and here). While I cannot and will not take anything away from Joseph's analysis, I am not quite happy with simply admonishing priests concerning their duties to men and boys. No matter how right it is to say that the renewed and rather improvised Ordinary Form of the Mass tends to put off men and boys more than it might women has value, as an observation, to the extent that we realize therefore that we are obviously doing something wrong. The point is that the Catholic Church has a duty to fix its rudder, regain the moorings from which it cut itself loose a half century ago, you choose the metaphor. The point is that certain options are not ours for the taking and we need to regain our footing if we are to be faithful to Christ and proclaim His Gospel in its fullness.

Life is not about unlimited choices but rather about faithfulness to the one God, living and true, which is ultimately about the depth of a relationship. Father Raymond in his books about the founders of the Cistercian Order and about St. Bernard of Clairvaux and his family makes a point about the nexus between routine, to the point of monotony (in daily schedule, diet, etc.), and profundity in the race to overtake Christ and save our world by grace. Basics and essentials are what enable us to carry our Catholic Faith in familiar (almost unchanging) trappings to that next level. Constancy in the externals seems to be a sine qua non for the interior life in all its length, heighth and breadth.

I accept the points in Joseph's paper and wish to harp on one of my constants. Caveat: I do not wish to take anything away from legitimate authority within the Church, but rather speak about the fortunate and unfortunate, the opportune and the inopportune. Divine worship is untouchable and we, deeply penitent, we need to restore it and face our miscalculations or imprecision of thought and analysis on certain other points touching on the Church's identity, as it was meant to be from its founding day. We need to move from present ambivalence and to return to solid ground. It could very well be that what Hilaire Belloc and many today have in mind when they say "unbroken and unwarped" is not the path the Supreme Legislator may choose to restore the liturgy, but tradition has its continuity and restoring it is more than a nod to male psychology, important as that indicator may be.

Multi-culturalism, multi-anything is not a vehicle for much. Perhaps many in the Church have been seduced by the siren song of multiplicity; perhaps they have failed to notice the chinks in that smiling facade. We owe much more than a facade to the faithful. As demanding as a liturgy in continuity with the tradition may be, an austere liturgy in its daily form and no longer as discursive and didactic as the OF on its good days, we need to pick up that thread and diversify our Gospel proclamation once again, no longer depending solely on Holy Mass, as if no other option remained to us for teaching the faith. That world sometimes in jest and sometimes derisively called one of smells and bells is where we need to be; vespers preaching, catechesis and renewed family life must do the rest. The point of saying that men and boys require more would seem to be to say that honesty requires more of us if we would truly do the work of God in worship.

So many of my favorite authors insist that a restored Catholic culture and a traditional liturgy as its crowning glory is where we must strive to be. If I rightly understand Belloc, we must become once again an institution which both in its liturgical life and in its governance would make others sit up and take notice. Persecution comes our way because we have certain pretenses and will not compromise the truth which comes to us from God as revealed in Christ.

My simple point is that in applauding Joseph Shaw's paper I want also to declare that I stand with Hilaire Belloc in insisting that liturgy and church order were not novel or unrecognizable in 200 AD with respect to 35 AD, that Constantine and company did not change much and that liturgy and church order should not be much different today either. Spirituality, genuine interiority, seems to be based on continuity with the past.

Some consider such matters debatable; I do not. And in case you are wondering, I don't have much time for abstract painting and none what so ever for atonal music.

Posted by Thomas Gullickson at 11:47 AM